Some thoughts for week

This week Ad Age published a piece by Weber Shandwick strategist Chris Perry on how marketers have not yet found the key to leveraging social media. Perry writes "what if social media and its inherent benefits are so revolutionary, so potentially game-changing, that it takes time for people to figure out how to best use them? More fundamentally, what if organizational silos and constraints limit its potential to address a new brand-building equation?"

He illustrates his thoughts by looking back to the military adoption of airplanes in the early part of the 20th century. Put into service by the U.S. Army's Signal Corps, their imagination limited them to usage. It took another couple of decades for the military to create an entire new institution to fully leverage flight (the Air Force). Similarly, marketers may be operating under limited imagination in using social media, with the "pace of functional change isn't keeping pace with the unprecedented social shifts disrupting media and consumer behaviors and the possibilities that come with it."

It made me think of another Ad Age piece, a presentation from New York Times' Derek Gottfrid speaking at the Conference on Technology and Creativity about what digital usage at the Times. As Gottfrid laid it out, in the last year, the Times has quietly followed the path of Facebook and Apple's iPhone, opening up itself to application developers to create mashups that help leverage and distribute the paper's content.

Besides giving dimension to interesting mashups, Gottfrid's talk is a great example of how module-based design has become a norm in the media business. Concretely, that means understanding that one's "property" is best composed as fluid and flexible, open to different attachments.The New York Times has done a great job along those lines, leading its reporters to move from print-only to multi-media savvy. Just look at today's front page digital edition. 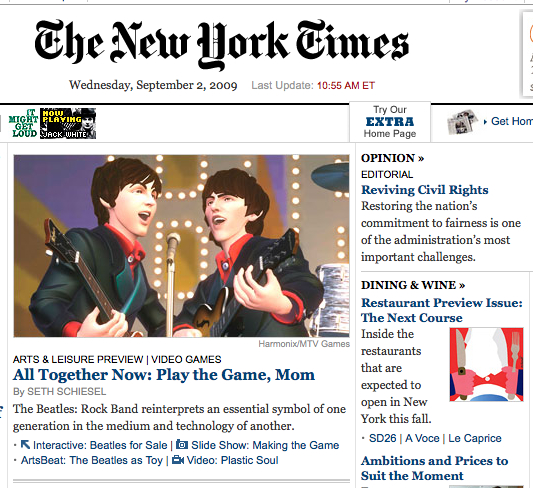 There's everything from video to slide shows. Today's New York Times, in a sense, is every bit as much social media as destinations like Digg or any blog. Indeed, it depends on blogs for content. All to say that traditional media may be doing a better job exploiting digital technology and digital user habits than traditional marketing. And if that ability is less around ROI than solely creating audience-friendly content (some of which may never be monetized), it's still worthwhile to acknowledge movement there.

What we're really talking about is an ability to leverage new models of infrastructure. In an analog model, infrastructure is end-to-end, single system, fixed. In a digital model, it is open to evolution, open to outside influence. Madison Avenue has not been able to think tap into that model in any deeply effective way. What it has done is scramble of how to reassemble its existing workforce (media people, designers, etc.) to grow into a new professional class to manage it. A bit like the American military did with the Air Force.

From a media production standpoint, it's easy to implement modular-media to evolve, whether giving reporters video cameras or adding places for readers to contribute and interact with columnists. For more conceptual needs like branding (which is not so much about creating content as about catalyzing more abstract ideas about a business or organization) modular design raises more challenges than answers. Its openness defies the cognitive and emotional wrapping that brand messaging tries to quietly spread. It is easier to use digital technology to create content-filled blogs or videos (and experiment) than use the wired - and open source - world to create singular meaning to which brand messaging aspires.

But where the American military needed a separate Air Force to fully capitalize on using airplanes to dominate in battle, I'm not sure we need another institution or professional class for marketing to better leverage digital tools.  Perhaps the real marketers capable of leveraging digital media are salesmen, the original social networkers.

I know it's counter intuitive. Salesmen have a reputation for a highly individualistic ethos. Branding is not about single individual. Even if so many brand messages glorify "the individual," as a discipline it's devoted to the singular meaning that best captures the organizations and the series of constituents of which they're composed. But I wonder if structurally it's the one-to-one meeting the one-to-many nature of digital that lend themselves to a bigger place for salesmen in the role of brand steward. Where that may have only been talk in the past, the power of a wired salesman today to foster a highly brandable set of relationships is powerful. Or the wired service person. Just look at the funny resonance of thinking about "the cable guy." How that persona can shape an entire feeling about a brand like Comcast or Time Warner.

Honestly, I have to admit I'm drifting now. This is an admittedly half baked notion. A riff. But hopefully anyone reading this will be more stirred to add to this than merely find it lousy thinking.

The comments to this entry are closed.